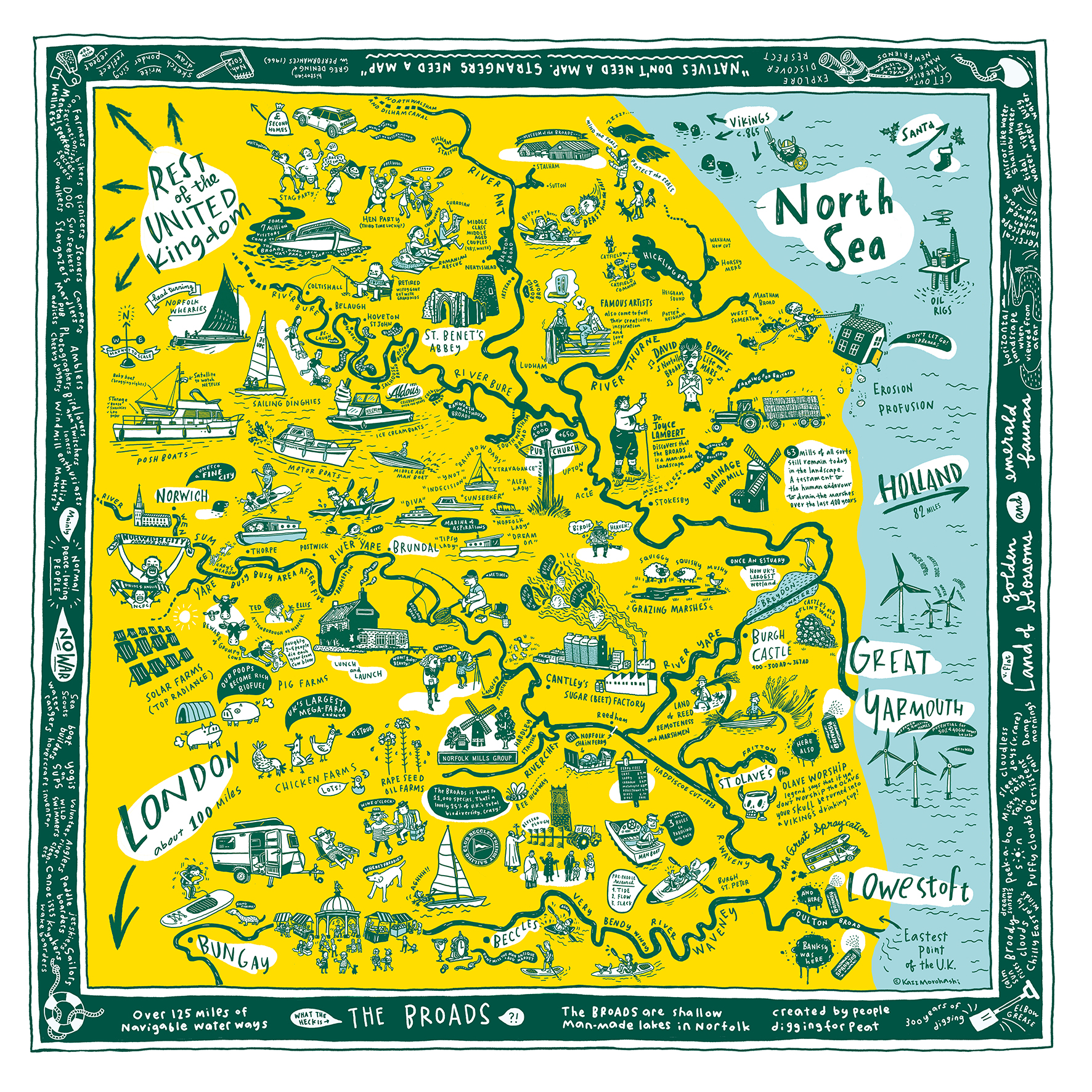 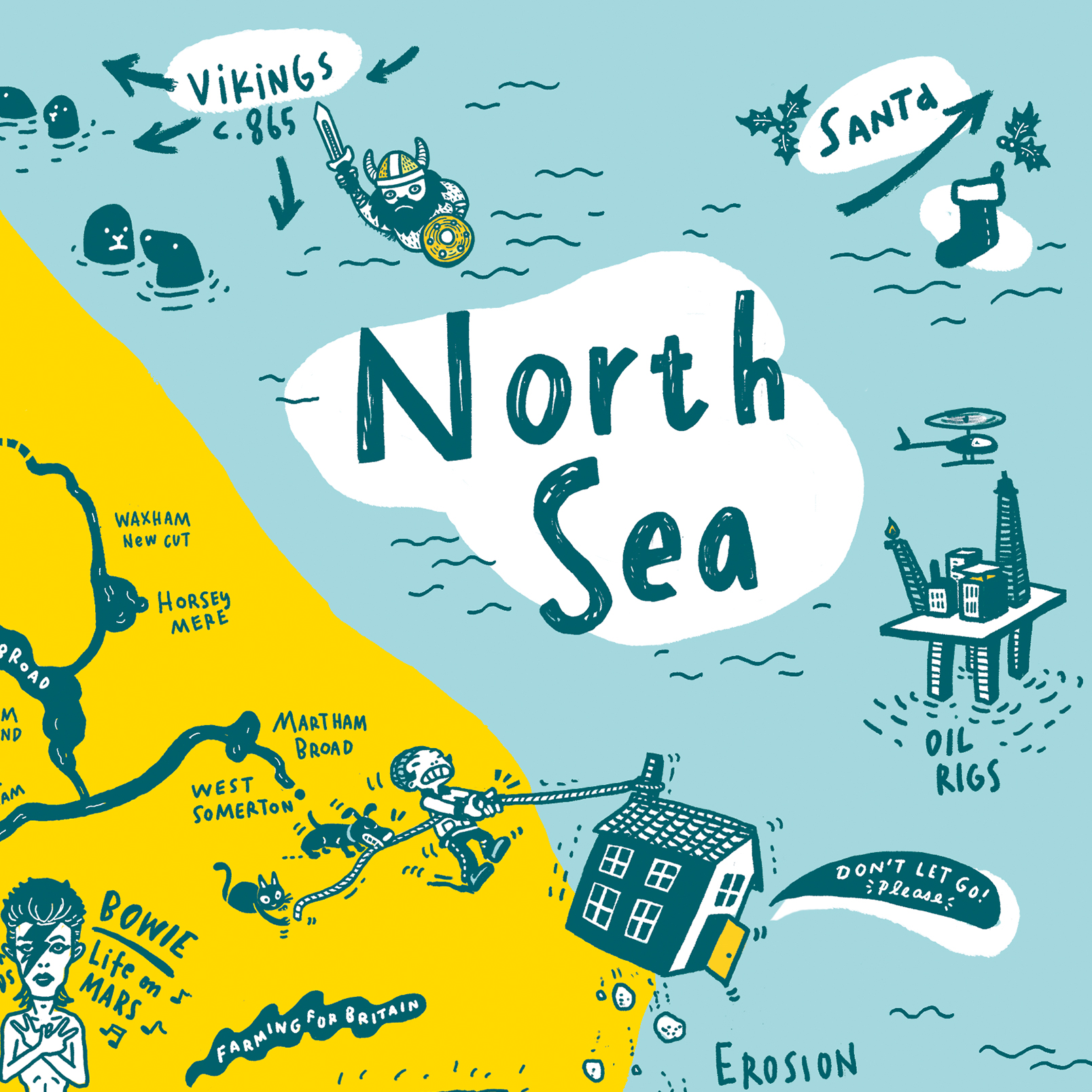 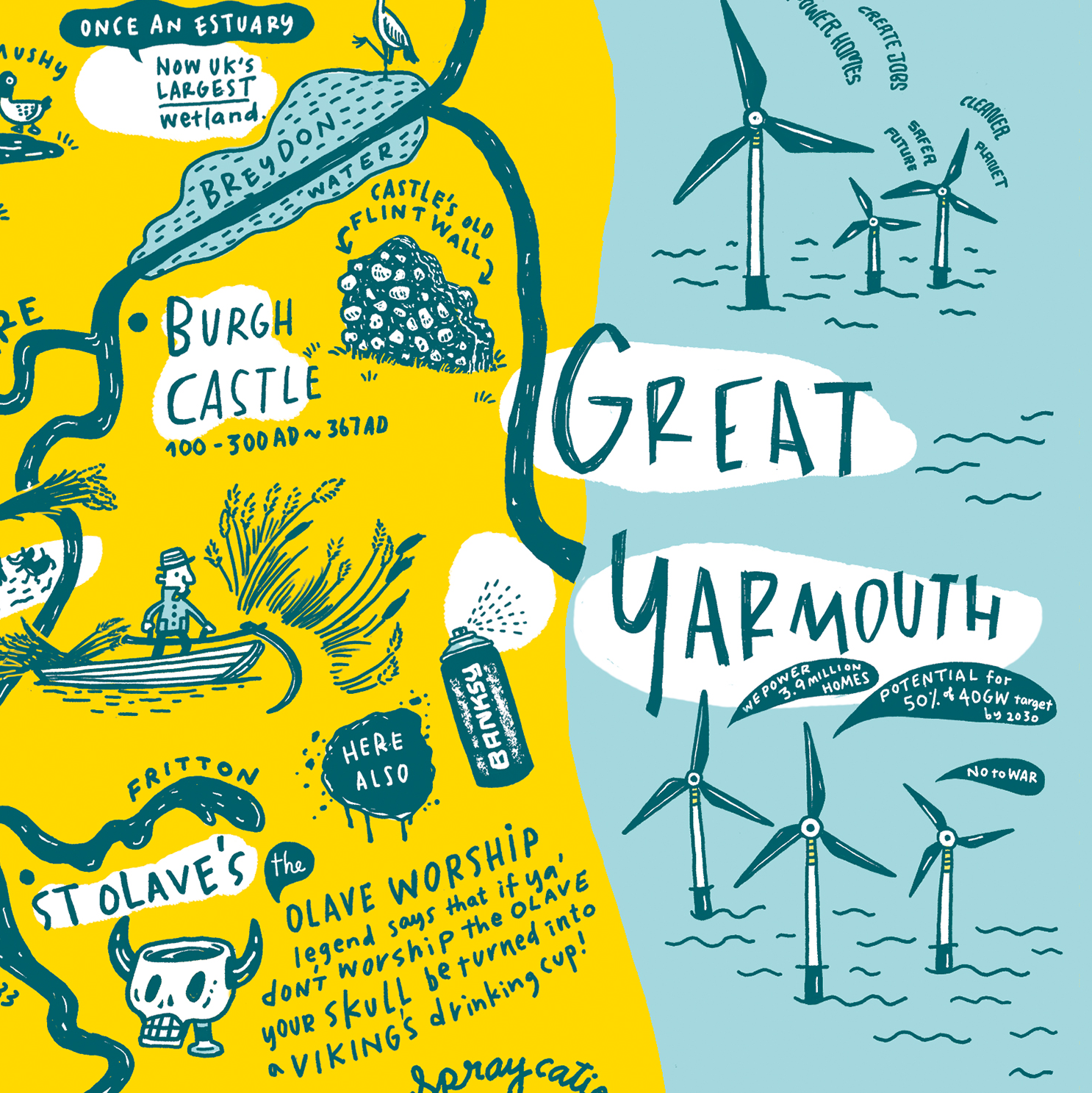 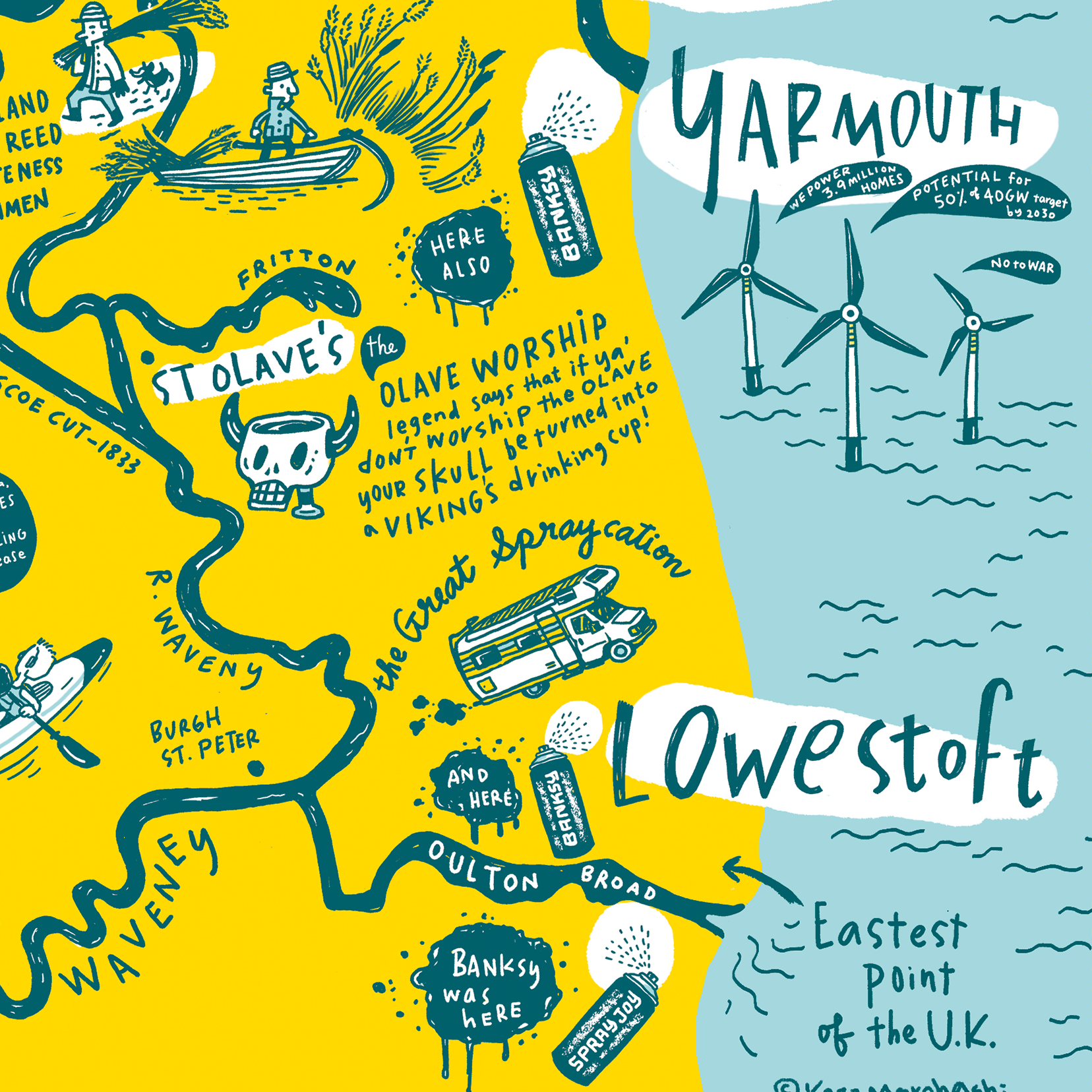 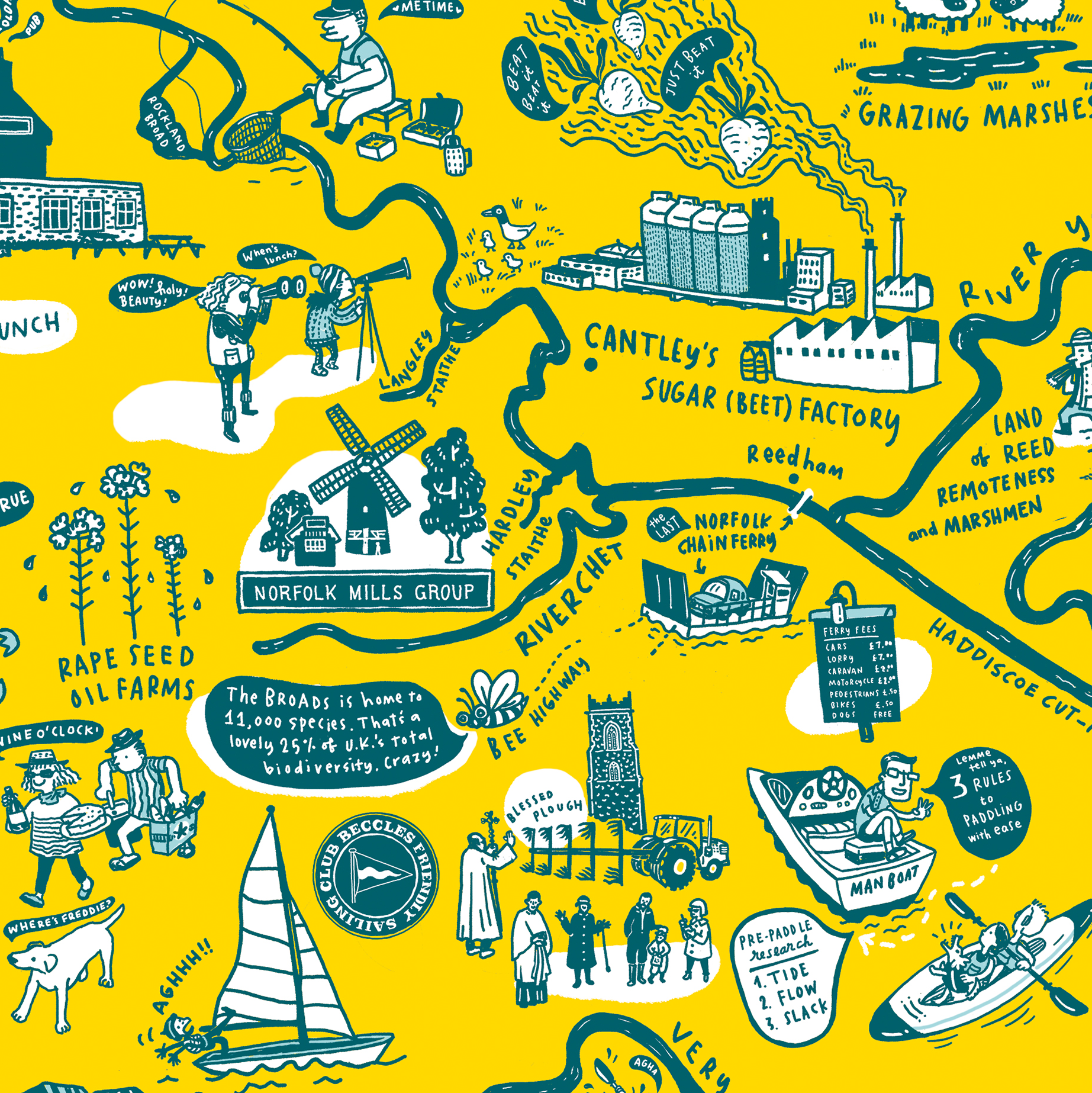 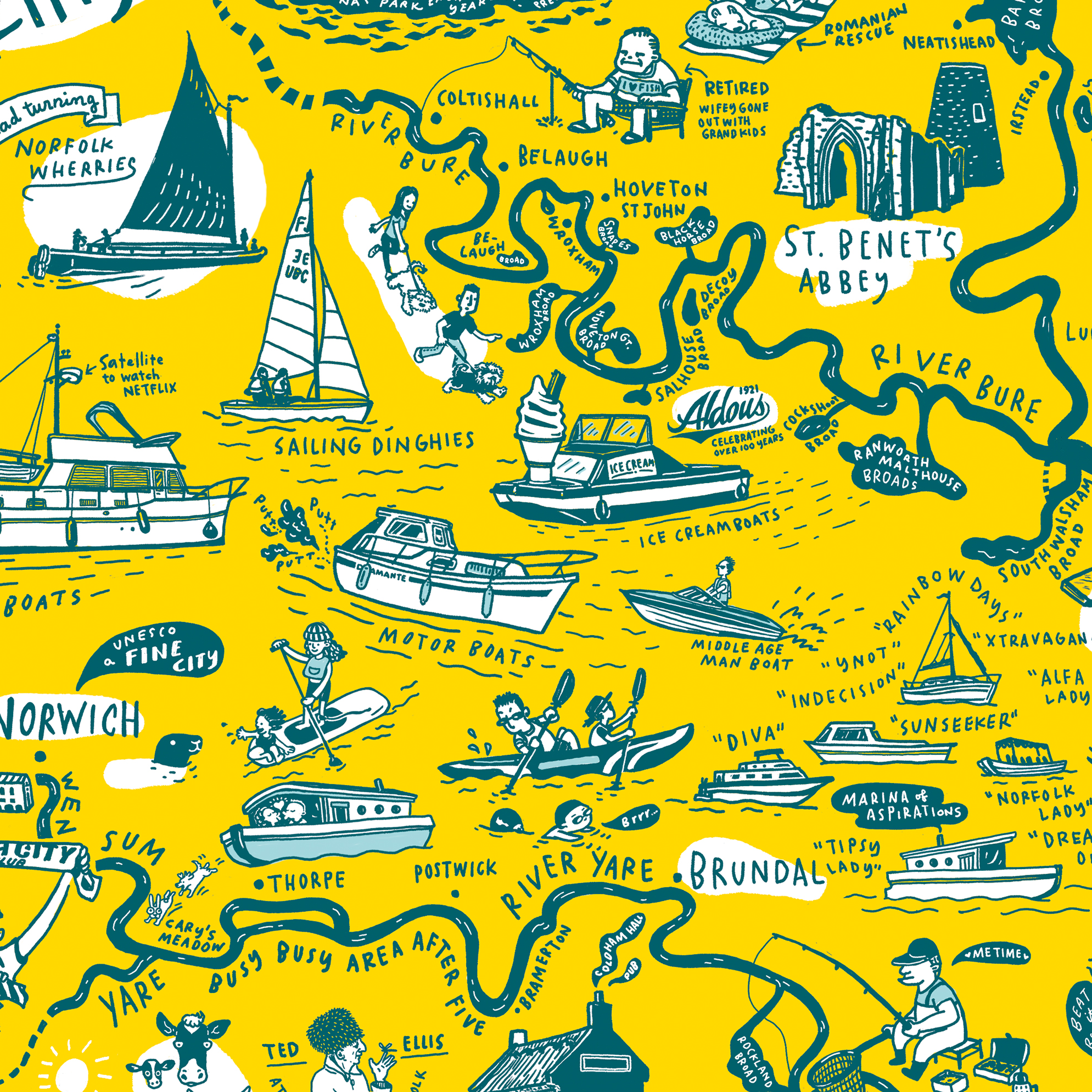 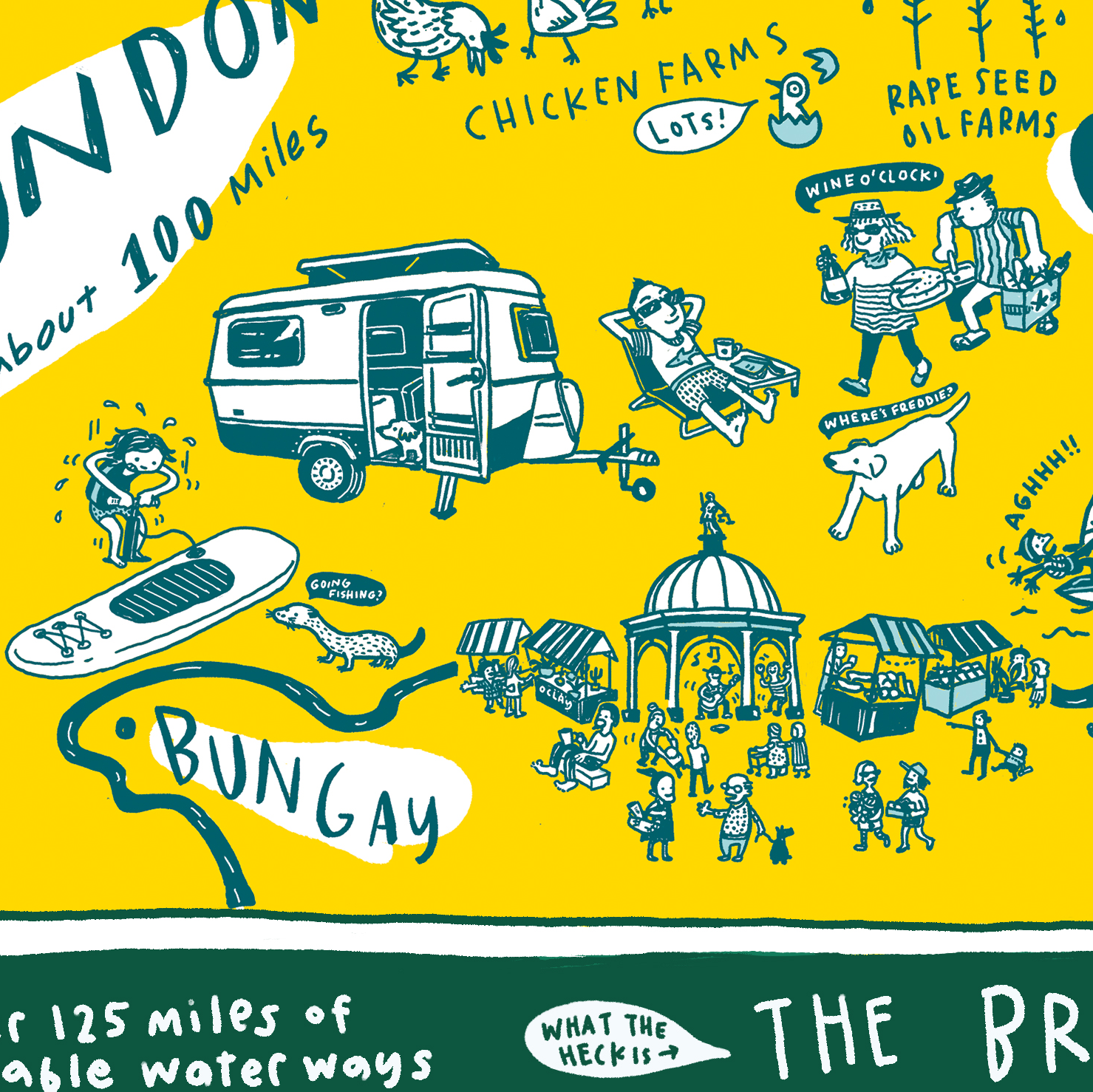 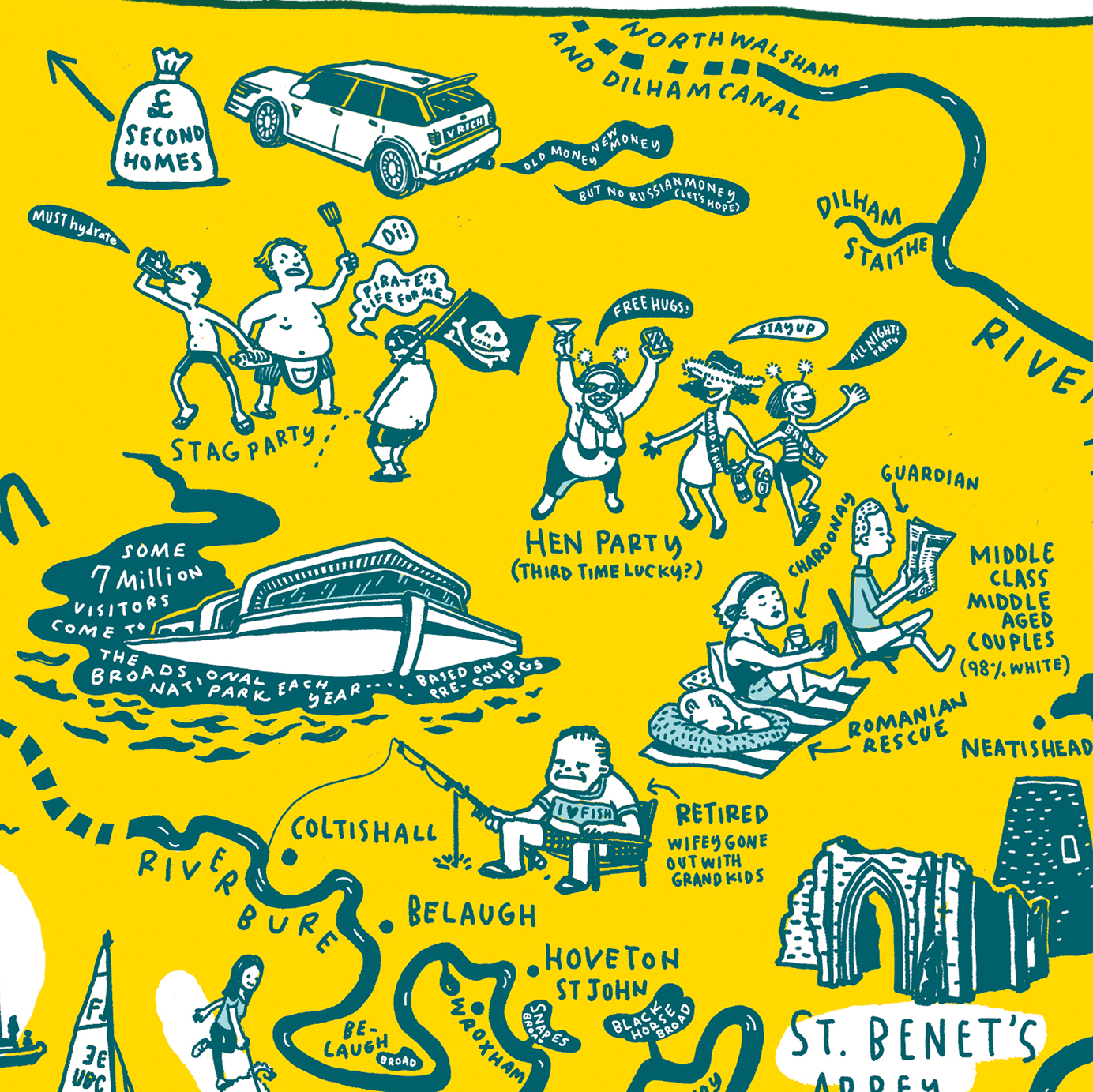 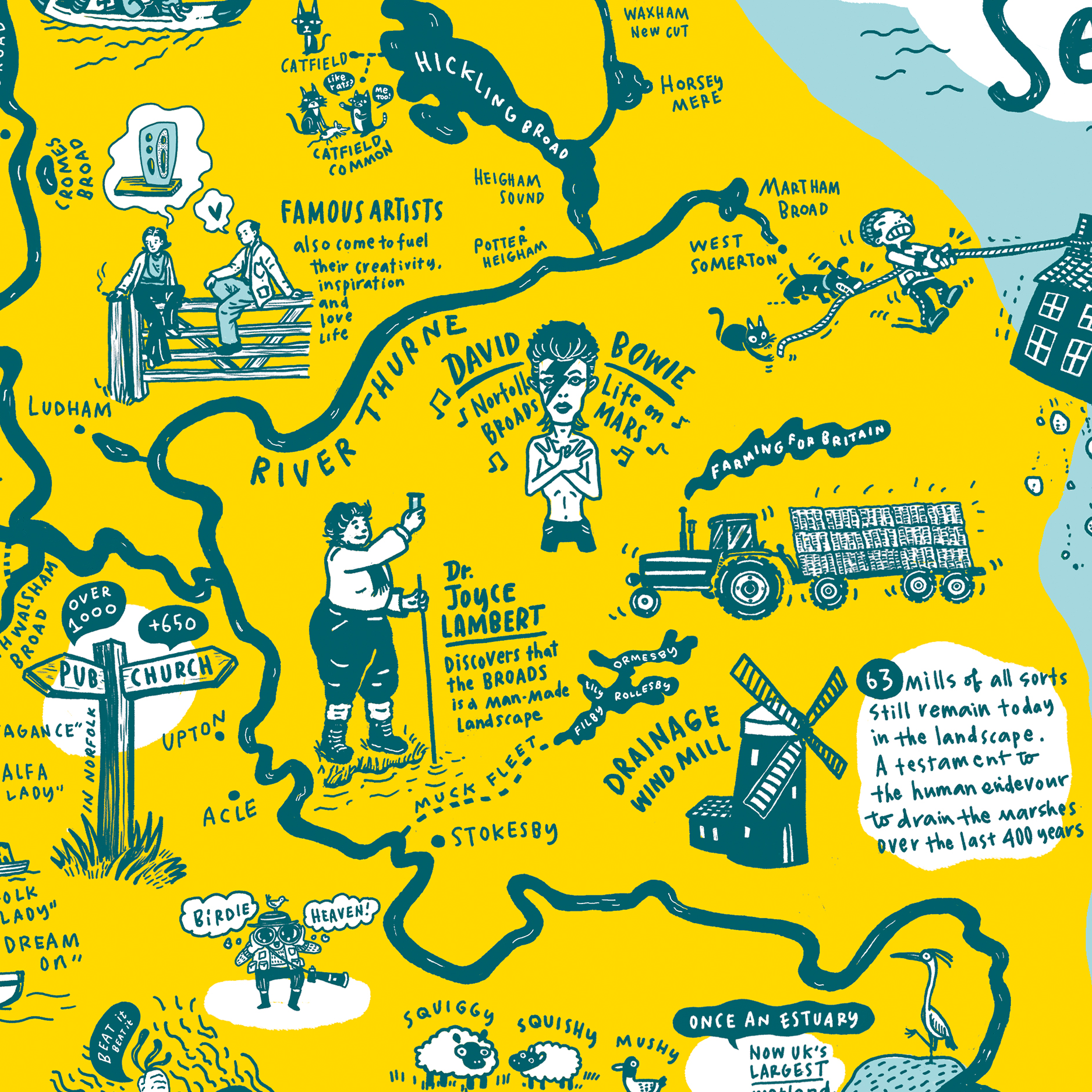 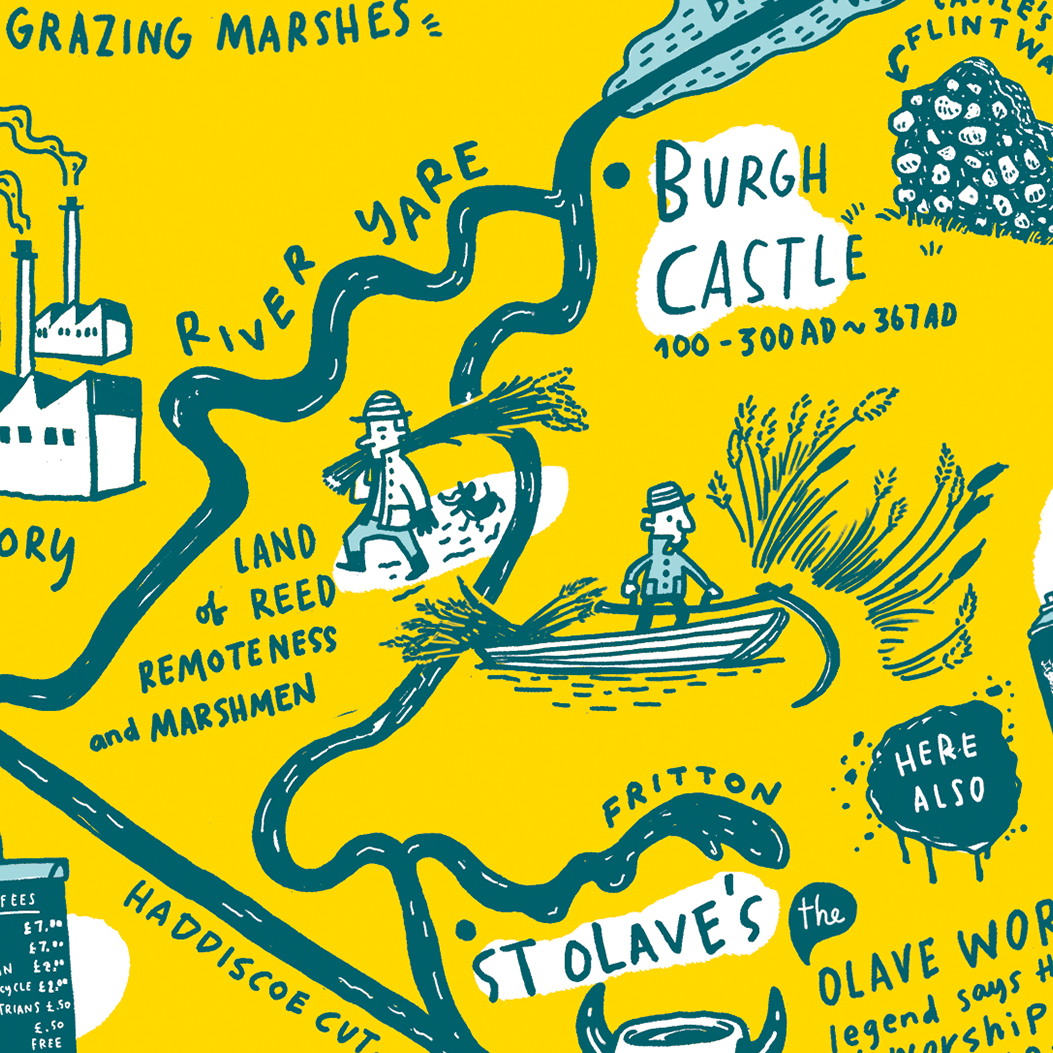 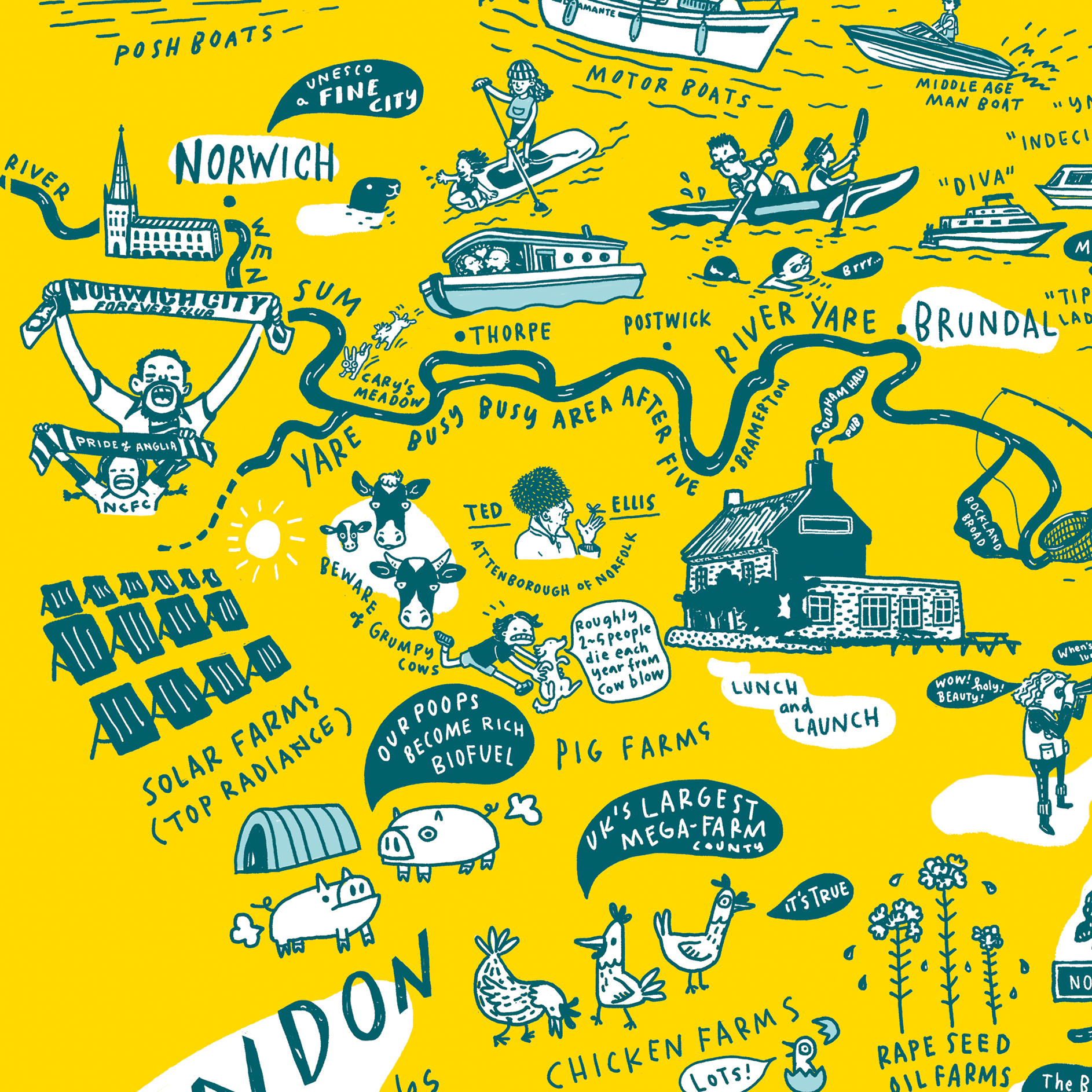 Between River and Reeds

Between River and Reeds is an artist led research project that culminated in an exhibition in Great Yarmouth in the summer of 2022. Each of the six selected artists explored rural communities in the Broads and drew drew inspiration from rural communities, their lives, homes and environments within the Water, Mills and Marshes scheme area. The artists considered how people’s lives and histories are interwoven with this environment and the changing environment of the Broads over time. As the final showcase of a year-long research and practice period, an exhibition was held at Skippings Gallery in Great Yarmouth from 9th – 25th June 2022. A follow up touring exhibition is held at the Assembly House in August 2022.

For the project, I wanted to shift the attention away from a nostalgic and romanticized interpretation of the landscape. Instead, I tried to emphasise the contemporary connections people have with the land. To do so, I recruited my dog and my better half and explored the Broads on kayak, SUP and on foot to gather a first-hand account of the people and the way in which they live, work, play and learn from the landscape. 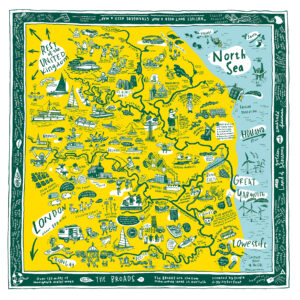 Taking inspiration from historian Greg Denning’s note about how natives don’t need a map but strangers to the area do, I took an outsider-looking-in approach. The result is an ethnographic doodle map that captures both field and desk research information. Illustrator at heart, I found this form of combining text and image to interpret a constellation of different information to be a useful way for me to organize my thoughts. The playfulness of the format allows me to include serious issues, such as the impact of coastal erosion and gentrification on the existing local communities. 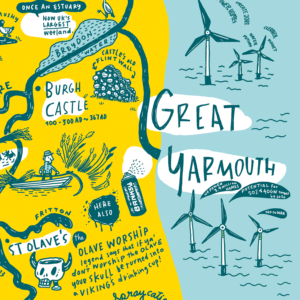 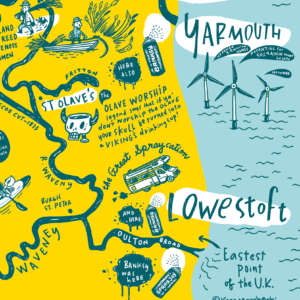 Yarmouth is a hidden gem of East Anglia full of amazing architecture and quirky flare. Over the decades tho, GY has gone down a slippery road and got a bit funky and nutty. But with a lot of positive thinking, collaboration and heaps of investment, it’s becoming an increasingly important cultural and industrial center, particularly around energy. In fact, the Norfolk and Suffolk coast is home to 47% of UK wind turbines and produces 44% of wind produced energy. Swoosh! Building a cleaner, safer, Russian blood-energy free future.

GY also has lots of swanky entertainment offerings, including one of my favs, @stgeorgestheatre_official, where you can catch a performance and a cuppa year round. Venetian Water (@waterwaysproject) is now all restored and beaming gorgeous, which will be joined in a few years (in theory) by the restored Winter Garden that has stood sad and crying for decades oozing with character and potential.

If you’re into a more street art experience, @banksy has hit up Yarmouth and Lowestoft recently during his memorable great spraycation outing.

Whatever you do, just be warned that if your plan includes a paddle and waddle on Breydon water, watch the tide as you can seriously get marooned on the mud flaps. Once an estuary, Breydon water is UK’s largest wetland for those twitchers out there. 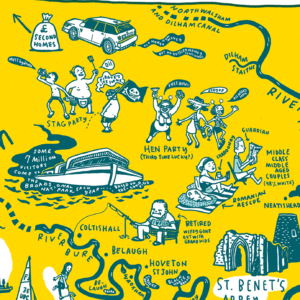 If you’re looking for diversity (socio-economic diversity, not race, which is 98% white), I found it most eclectic up around Wroxham. With many fiberglass caravan-on-water boats on hire, you get to see heaps of holidaymakers celebrating a variety of occasions on the river. In fact, some 7 million visitors come to enjoy the Broads every year (pre-covid figs.)

Common river visitors are the stag-do boys who live out their inner-pirate fantasy with booze, rockstar attitude and a customary pirate flag flapping proudly in the rear.

Trying to outdo the stag boys are the hen party girls. Interestingly, many of the hens I came across are less spring chicken and more second (or third) time hopefuls to the altar. With Barbie pink pom-poms dancing above their heads and clad in bikinis struggling to keep what’s spreading out in are an endearing sight of the Norfolk Broads.

If you venture out further along, say River Ant, you can find the semi-locals who know how to find the good secluded spots. There, they indulge in complete silence to read their weekend Guardian supplements, drink chilled wine (they have their own boats with own cooler with own wine, no less of course, from M&S) and admire their placid dog (ideally a rescue, preferably from Romania or similar dog negligent countries for double karma points).

I also often found solo-anglers. They seem to have this zen aura of ‘leave me alone’ energy. What they think about as they sit patiently for a gullible fish, I’ll never know. But I do know that they crave space, both physically and mentally. So I never stopped to chat to them. 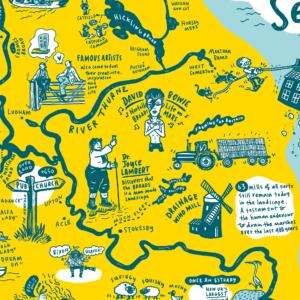 Between River and Reeds history 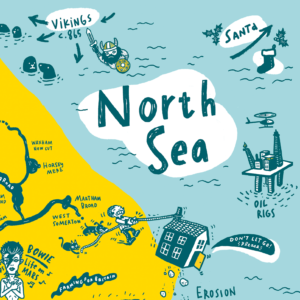 Between River and Reeds North sea

For those who are still trying to find out more on what makes the Broads a special place, I offer you some interesting facts:

The person who made the sensational discovery that the Broads is a man-made landscape (rather than a natural phenomenon) was by a female botanist and ecologist Joyce Lambert. When she presented her findings in 1952, loads of scepticism were chucked her way. But the world soon cottoned on, thanks to her extensive fieldwork of collecting soil samples, showed that between 12th and 14th centuries, each parish exercised their right to harvest peat for fuel. Go girl power!

If you’re into mills, good news. There are plenty to spot still to this day. 63 still standing in various forms of preservation. Part of the @water_mills_marshes project was to restore some of these important cultural assets. Spot them all and feel smug.

For those who prefer to work on their biceps in pubs, there are over 1000 pubs in Norfolk. Feeling guilty for all the calorific IPA intake? No worries, there are 650 churches to atone your temporary loss of judgement.

The Broads may be 100 miles from London but it is still the hot spots for those who know. They include famous artists like Barbara Hepworth, Ben Nicholson and even the fabulous #DavidBowie 😍😍😍 Star value 💯 all the way to Mars, baby 🤟🎶

Whatever you do, just don’t plan on staying long, especially along some of the coast lines as houses are adios-ing into the North sea. According to the British Geological Survey, the Norfolk coast has been chipping away at the present rate for 5000 menasing years. But, according to one study, that rate is accelerating. One example is Happisborough (which is not pronounced ‘happy’s-boro’ nor residents very happy living in what’s been now labelled as the ‘worst hit’ place in the UK for coastal erosion in a report by confused.com in the @eastern_daily_press ). Hefty chunks keep falling into the sea….and locals rooted to the land try their very best to stay, protect and salvage. @climatecentral has an amazing map that shows landmass predicted to be blowing bubbles by 2050.